After having rebooted my gunpla building a couple of years back. I thought it's time I went back to my grass roots.  So what do I do? I splurged on plastic model kits of planes, cars, and ships. No tanks yet, maybe in the near future.  Got around to prepping some kits for building such as primer coats and such. But so far, I haven't really gotten too far on a lot of them.
Here I'll be sharing with you some progress shots of the first aircraft I've gone far along as complete the build. It's just that I haven't been able to apply camo patterns because my compressor is broken.
So I give you the Academy's 1/48 scale Supermarine Spitfire Mk IX as she appeared in the African theater with the British Fighter Air Wing in 1943-44.  As is known in plamo communities, Academy pretty much makes cheaper replications of Tamiya kits.  Cheaper also means that you can expect some shoddy fabrication with the runners, so some re-work on the plastic parts will most likely be necessary. 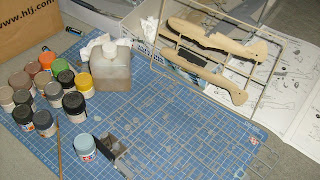 Here you see the main hull already painted inthe base color of Desert Yellow from Tamiya.  At the bottom, I'm working on adding the detail colors such as cockpit dials, levers and buttons. all of which were dry brushed. 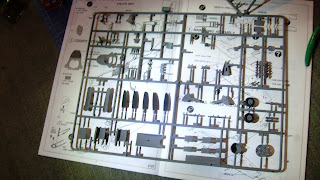 Not much on the bright colors. Mostly silvers, and flat blacks, and a spot of light blue and yellow here and there. 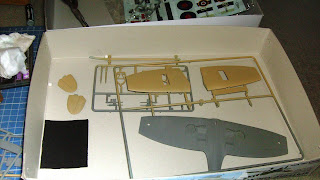 As you can see I've also already painted the under carriage part of the wing in Light sea gray. 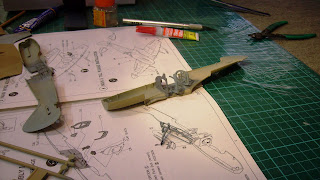 This part took me the longest to put together. The Pilot seat was a pain to put together.  The Control rods had to be slot through holes into the safety frame and connected to the pedals. All the while trying to keep the frame from caving in. Yeah, something I'm not looking forward to my other WWII aircraft in queue. 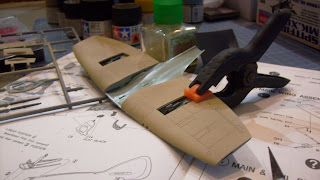 Putting the wing halves was pretty straight forward. Just remember to put the machine gun pod in before sticking the 2 halves together. 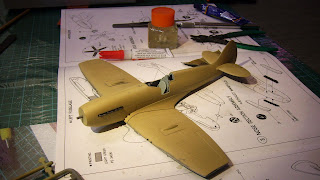 Here you have the fuselage and the wing assembly put together. Quite glad they came together without much of a hassle and a gap between them.  Elevators are also in place. 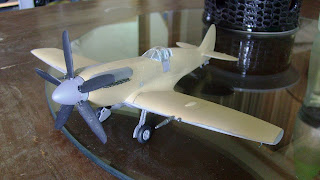 And here she is all together. Albeit a camo paint job is in order, she's looking mighty spiffy here. Opted for the clipped wing tips as well as the low slung air intakes.
Until I get my compressor working again, I don't think I'll be able to put up fully painted kits. Meanwhile this is how she will be for a while.  Right now, I'm just completing the 1:720 scale LHA-4 USS Nassau by Italeri. Boy, does it have serious warping issues. Also on the side is my first Modern aircraft in a while; Academy's 1:48 scale F-16C Block 30 Fighting Falcon. I'm currently stuck with the fuselage as it is a bit misaligned. And the wing has this horrendous gap where it meets the upper half of the fuselage.  Soon as I get those sorted out, I'll be posting pics of it in it's final build phase.
Published Tuesday, May 17, 2011 No comments:

If Black Rock Shooter had a Mech...
Well, I guess a lot of you guys already know annoying and smug little me. But for those who don't here's a quick backgrounder about me:
About Me
I've been building Gunpla for well about a decade now, long before Gundams nor Anime became house hold names here in Manila. I had amassed a good 90+ kits with a mixture of HG, HGUC, and MG's from various series like Zeta, Sentinel, 08th MS, Victory, and Silhouette Formula. Alas, my humble abode was collateral damage from a fire that gutted 4 homes, ours included, in late 2002. Along with it my gunpla collection. And so I sought it best to start over, and restarted building gunpla with the MG MSA-0011 Ex-S Gundam in December 2003.

If there was something I'd really like Bandai to see make into a 1/100 Master Grade Kit, it would have to be more from the Victory Gundam Series, particularly the Victory Dash Gundam, but since the V Gundam is already out as a Ver. Ka. I is excited about it. Another one would have to be the MS-303E Deep Striker. Also, though it's already been released by G-system, I'd appreciate it if Bandai could find ways to make the 1:35 scale Zeta Gundam More easily available.
If you're interested in reading more, click on "about me" to take you to my "Otacool" room post. ^_^. Coffeebugg out.

Play-Asia.com - Your One-Stop-Shop for Asian Entertainment